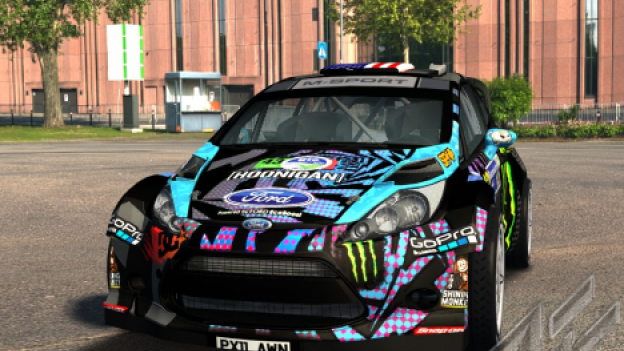 The ford fiesta is the World Rally Car built for the Citroen World Rally Team by Citroen Racing for use from the 2011 World Rally Championship season. It is based upon the Citroen DS3 road car, and replaces the highly successful Citroen C4 WRC. It is built to the new World Rally Car regulations for 2011, which are based upon the existing Super 2000 regulations, but is powered by a turbocharged 1.6-litre engine rather than the normally aspirated 2-litre engine found in Super 2000 cars. Development work on the car was carried out in 2010 by Citroen drivers Sebastien Loeb, Dani Sordo, Sebastien Ogier and test driver Philippe Bugalski as well as sister Peugeot drivers Kris Meeke and Stephane Sarrazin. The engine has been specifically developed for this car (older regulations required that the engine be based on an existing mass-produced engine's cylinder block and head gasket). It officially develops 300 bhp (223.7 kW) at 6,000 rpm and 350 Nm (35.7 kgfm) at 3,250 rpm.