Another prominent figure in the RS Cosworth development was Ruedi Eggenberger of Eggenberger Motorsport. The crack Swiss outfit was selected by Ford to run the Works team and the resulting black Texaco backed cars were the cream of the Touring Car crop. An expert with forced induction motors after success with the turbocharged 240 Volvos, Eggenberger immediately realised the potential of the Sierra RS Cosworth. At the same time he was also very aware that the standard equipment on the cars was not up to the job when it came to ruling the Gp.A roost.

Early in the RS Cosworth programme, Eggenberger held discussions with Stuart Turner and Ford Motorsport Europe technical experts on how they would best use the 'Evolution' rule within the Gp.A regulations. The end result of these talks was the definition of the specification of the 500 evolution variants of the RS Cosworth, later to be come known as the Sierra RS 500 Cosworth. Essentially, the RS500 was an Eggenberger creation in all but name.

Ford then had to build 500 Sierras with the neccessary high performance parts fitted for road use. Only then could the race cars have these parts fitted to unleash the extra performance. Ford struck a deal with long-time partner Tickford to produce 500 very special vehicles. These were to become the RS 500s. Ford were well aware of these rules and at the end of the 5000 run of Sierra RS Cosworths, they produced an additional 500 vehicles that were stored away. It was these cars that went to Tickford to be modified to RS 500 specification.

It could have been a very different story, however. Eggenberger themselves were slated to do the conversion from RS Cosworth to RS500, only a lack of time and the fact that the neccessary 500 cars were already in the UK swung it in Tickford's favour...

Many less informed fans of the car think it's called an RS 500 because it has 500bhp. This couldn't be further from the truth. In Gp. A racing form the cars did indeed develop power levels north of 550bhp, but the roadcars left Tickford with just 224bhp. Still a large amount of power for 1987...! The cars were called RS 500 because of course, there were only 500 made, all in right-hand-drive and all modified by Tickford in the UK. For this reason, all the Group A racing cars aren't really RS 500's at all. Most were built from the ground up to be racers, starting out with a special motorsports shell which was seam welded and had an integral rollcage welded in. 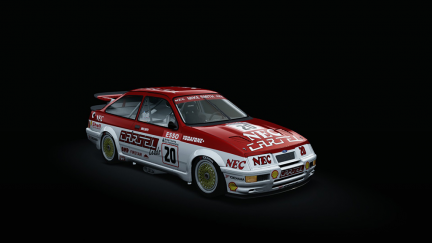