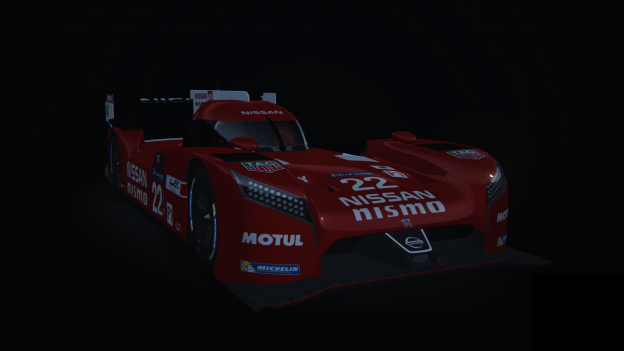 The Nissan GT-R LM Nismo is a sports prototype racing car built by the Nissan Motor Company and their motorsports division Nismo. Designed for the Le Mans Prototype 1 Hybrid (LMP1-H) regulations of the FIA World Endurance Championship and the 24 Hours of Le Mans, the GT-R LM is unique amongst Le Mans Prototypes for utilizing a front mid-engine layout for its internal combustion engine as opposed to the rear mid-engine layout used by nearly all other competitors in the category. It is Nissan's first prototype since the R391 competed in 1999, although the company has supplied engines in recent years. The car is branded after the Nissan GT-R road car and shares similar engine and drivetrain configurations, but is not related to the sports car. The GT-R LM Nismo program was announced on 23 May 2014,while the car was publicly shown for the first time in a Nissan commercial during Super Bowl XLIX.

On 1 February 2015 Nissan intended to enter two GT-R LMs in the 2015 FIA World Endurance Championship starting in April 2015, while a third car would be entered for the 24 Hours of Le Mans. The team is based in Indianapolis, Indiana, while the first test of the car took place at Nissans testing grounds in Arizona. Later testing took place at the Circuit of the Americas in Austin, Texas. Initially planned for a launch in Europe, Nissan North America chose instead to integrate the new car into their Super Bowl commercial, and the film was made during the GT-R LMs testing at Circuit of the Americas. Former Le Mans winner Marc Gene was the first driver announced for the program, moving to the team from rivals Audi. Harry Tincknell, who won the LMP2 category at Le Mans in 2014, joins former European Le Mans Series champion Olivier Pla for the next set of full-season drivers announced for the Nissan program. Defending Super GT champion Tsugio Matsuda was also announced to the team for the third Le Mans entry. Jann Mardenborough and Lucas Ordonez, former winners of Nissans GT Academy were also announced alongside former FIA GT1 World Champion Michael Krumm. Krumm and Mardenborough will contest the full World Endurance Championship while Ordonez will partner Matsuda in the additional Le Mans entry

The GT-R LM made its virtual debut in Gran Turismo 6 as downloadable content for the 2015 GT Academy competition.