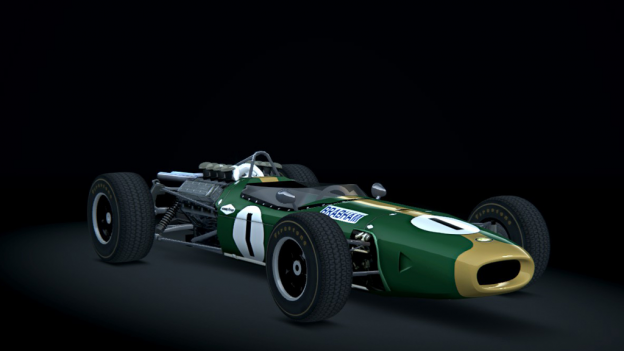 Following the trusty design principles a new single seater was designed for 1967; the BT23 for Formula 2 and the BT24 for Formula 1. The latter featured different suspension, brakes, wheels and gearbox to cope with the latest specification Repco engine,producing 350 bhp which was by no means impressive, but it did produce a very flat torque curve. The competition seemed to have gotten to grips with things and the days for Brabham seemed numbered. Fortunately the rock-solid reliability and nimbleness again proved too much for the more advanced competition and the BT24 scored three 1-2 finishes in the hands of Brabham and Hulme. Together with the Monaco win in the BT20, it was enough for Hulme to score his first Driver's Championship, just ahead of his boss. The team won the Constructor's Championship for the second year running.

Very small; light and narrow; long wheelbase relative to its width. CG somewhat high relative to its width, causing the chassis to tend to roll more than most of the others. This can make it more prone to bottoming its suspension. Weight bias more to front than the other cars. Long wheelbase makes it stable and very progressive if set up properly. . Repco Grand Prix engine is down on power to the other cars but has a very broad torque band. Setup tip: Tall lower gears to take advantage of torque, concentrating use of available power nearer the top speed.