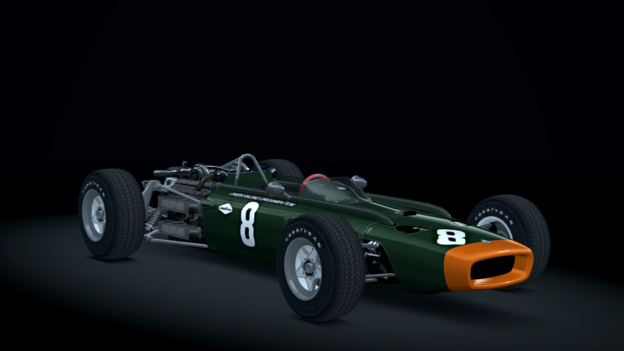 The BRM P83 was a Formula One racing car designed by Tony Rudd and built by British Racing Motors for the new engine regulations of 1966. It used a highly unorthodox H16 engine which caused problems throughout the car's racing life, and despite the best efforts of Graham Hill and Jackie Stewart took BRM from championship contenders to also-rans, leading it to be regarded alongside the BRM Type 15 as another embarrassing failure for the British marque caused by a fetish for overcomplicated engineering. BRM decided to hedge their bets by developing their existing 16 valve 1.5 litre V8 into a 32 valve 3 litre H16, effectively two flat 8s one on top of the other and geared together. The sheer complexity of the engine led to a truly terrible record of unreliability; engine, transmission and related problems caused 27 of the powerplant's 30 retirements from 40 entries. Jackie Stewart said of the engine: it was unnecessarily large, used more fuel, carried more oil and needed more water - all of which added weight and diminished the vehicle's agility. The 64 valve engine produced 423 horsepower at 10,500 RPM. The H16 had an extremely narrow power band and was by some distance the heaviest engine on the grid, starting out weighing 250kg when introduced in 1966 with the final lightweight version lowering this to 180kg.

Short, wide, and heavy, with very high CG due to upper crankshaft and other engine mass. Short wheelbase and extreme rearward weight bias make it prone to over-rotating on turn-in and under power. Rearward weight bias gives it good traction and good braking. High CG requires lots of roll resistance; weight requires high wheel rates.
GP engine is very peaky, with a very narrow power band, but it is very powerful, which offsets the weight of the car to some extent.