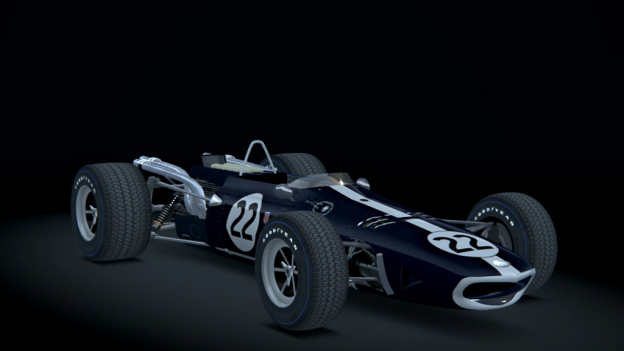 The Eagle Mk1, commonly referred to as the Eagle T1G, was a Formula One racing car, designed by Len Terry for Dan Gurney's Anglo American Racers team. The Eagle, introduced for the start of the 1966 Formula One season, is often regarded as being one of the most beautiful Grand Prix cars ever raced at the top levels of international motorsport. Initially appearing with a 2.7L Coventry Climax inline 4-cylinder engine, the car was designed around a 3.0L Gurney-Weslake V12 which was introduced after its first four races. In the hands of team boss Gurney, the Eagle-Weslake won the 1967 Belgian Grand Prix, making Dan Gurney only the second driver at the time, and one of only three to date, to win a Formula One Grand Prix in a car of their own construction. That win in Belgium still stands as the only Formula One victory for a USA-built car

Long, wide track, fairly light. Weight bias near middle of the range of cars. Stable as long as it's kept off the bump rubbers; seems a bit more prone to bottom than would be expected considering its weight and track. Engine is powerful with good torque.