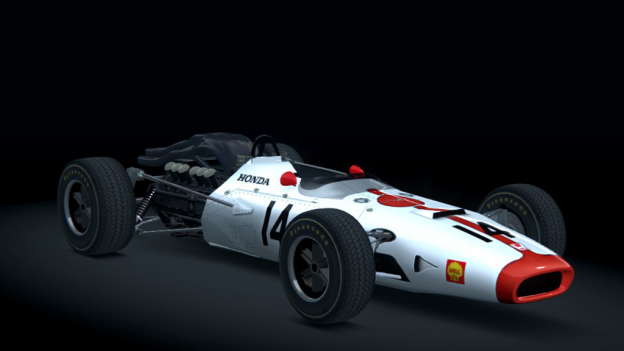 The Honda RA300 was a Formula One racing car produced by Honda Racing, and introduced halfway through the 1967 Formula One season. It retained the same V12 engine as the preceding RA273 car, but the chassis was designed by Lola's Eric Broadley and based on a previous Lola Indianapolis 500 car, the T90. This collaboration resulted in the machine being quickly dubbed the Hondola by the motorsports press.Broadley's chassis was much lighter and sweeter handling than the previous in-house design. The car initially performed impressively, winning in its first ever World Championship race at the 1967 Italian Grand Prix. Driver John Surtees took the lead from Jim Clark's Lotus and Jack Brabham's Brabham on the final lap, after Clark ran out of fuel and Brabham ran wide. However, the RA300 flattered to deceive, and this would turn out to be the only lap that an RA300 would lead, and it never again took a World Championship victory. It remains the only F1 car ever to take its single victory in its very first Grand Prix, and on the only lap it would ever lead.The 48-valve V12 Honda first appeared at the 1966 Italian GP driven by Richie Ginther (USA). In spite of weighing 740 kg (dry) it was capable of spinning the rear tyres at 100 mph in third gear. With cylinder dimensions of 78.0 x 52.2 mm 2,993.17 cc, a target of 400-440 bhp @ 12,000 rpm was quoted. The engine used by John Surtees at the 1967 Italian GP was quoted by Motoring News as developing only 396 bhp, but with improved torque and response. The vehicle weight excess over the 500 kg minimum had been approximately halved.

Fairly long and narrow. Heavy with extreme rearward weight bias, but long wheelbase makes it stable as long as yaw rate does not get too high. Rearward weight bias gives good traction. Braking can be hard due to the higher weight. It's stability makes it more tolerant of bottoming the rear suspension. The engine is the most powerful of all but is soft on the bottom end, making it easy to drive but hurting acceleration. Space the gears properly to keep the engine in the narrow, peaky powerband.