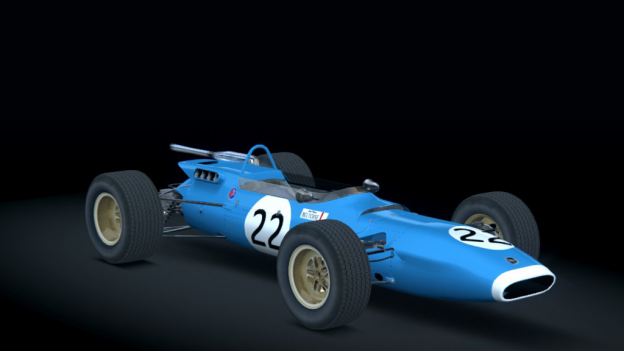 By 1967 Formula Two was dominated by F1 stars on their 'off-days'. Engines were mostly by Cosworth (based on Ford blocks) and Honda, BMC, Fiat and BRM featured as well. With the 'return to power' of F1, the gap between the series had grown too great and a change was needed. Therefore the FIA increased the maximum engine capacity to 1600cc and introduced the European F2 Championship. The most popular engine was the Cosworth FVA which was effectively the 'proof of concept' for the legendary DFV. The 1967 FVA gave 220 bhp @ 9,000 rpm. Other units included a four-cylinder BMW and a V6 Dino Ferrari.In the mid-1960s, Matra enjoyed considerable success in Formula 3 and F2 racing, particularly with the MS5 monocoque-based car, winning the French and European championships. In 1967, Jacky Ickx surprised the F1 establishment by posting the third-fastest qualifying time of 8:14 at the German Nrburgring in his 1600cc Matra MS7 F2, which was allowed to enter alongside the 3000cc F1 cars. In the race, he failed to finish due to a broken suspension.While only modestly successful in Formula One, the car dominated Formula Two from late 1967 through 1969. Jacky Ickx, Jean-Pierre Beltoise and Johnny Servoz-Gavin won the European Championship in those years respectively, all driving the MS7 at least at some races.

The light and nimble F2 car makes the perfect trainer to enter the pinnacle of motorsports. Although low on power on narrower circuits the car is a great challenger to the overpowered 3 liter monsters, due to it's lower weight, agility and higher corner speed. In the hands of a good racer this car can beat it's bigger brothers.