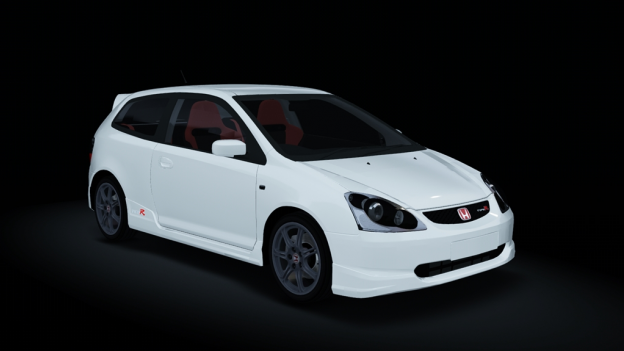 The Honda Civic Type R is the highest performance version of the Honda Civic made by Honda Motor Company of Japan. It features a lightened and stiffened body, specially tuned engine and upgraded brakes and chassis. Red is also used in the interior to give it a special sporting distinction and to separate it from other Honda models. In Japan, there is a one-make series of Honda Type R cars where privateers can purchase an off-road Type R and compete in a series championship which is a stepping stone for many aspiring racing drivers.

2001 Honda introduced the next generation of the Civic Type R EP3 as a unique 3 door hatchback to the UK market, which was manufactured in Swindon, England. This EDM Civic Type R featured a 200 PS 2.0L i-VTEC engine K20A2 and the regular Type R treatment of seam welding, close ratio 6-speed transmission and uprated brakes, but did not include some of the other higher-end features, such as the helical LSD and red Recaro race-seats, that were standard in the previous generation EK9. However, Honda of Japan marketed a JDM Japanese domestic market version of the EP3 which was exclusively manufactured in Swindon, UK and was shipped to Japan, which retained the highly renowned helical LSD similar to that of the EK9 and red Recaro race-seats. Other differences included a more track-oriented chassis/undercarriage settings as compared to the EDM, as well as a 215 PS i-VTEC engine had a fully balanced crankshaft assembly with different intake manifold, exhaust manifold, higher-lift camshafts, higher-compression pistons, chrome-moly flywheel and ECU programming.

All of the Japan-spec K20A Type-R powertain were built in Japan and were shipped to the Swindon to be install in the Japan-spec Type-R EP3. The JDM EP3 was also available in the traditional Type R championship white while the EDM was not.