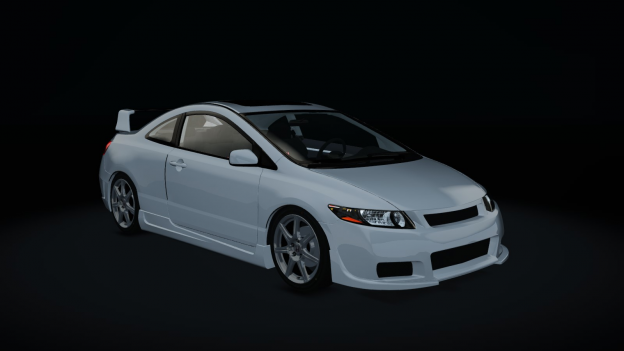 The Honda Civic SI is a sport compact trim of Civic by Honda. The SI (Sport Injected) trim was introduced for the third generation of Honda Civics in both Japan and North America. The SI was redesigned for the 2006 model. The car comes with a 2.0-liter K20Z3 i-VTEC engine that produces 197 hp (147 kW; 200 PS) and 139 lbfft (188 Nm) of torque, while also including a 6-speed manual transmission with a helical limited slip differential. Forty percent stiffer spring and dampening rates from the non-SI trims and stiffer sway bars have bolstered the Civic SI's handling, with the car achieving 0.90g (8.8 m/s2) of lateral acceleration on the skidpad. It is also the quickest Civic SI off the line, with a factory 060 time of 6.7 seconds.

The Civic SI is a sport compact car not a race car so, dont expect it to behave like one.
It understeer... yup it is. Its like that IRL. Give it 2 laps for tires to warmup and while entering in a curve the rear will get loose under break. Its super fun.
I own one and drove it on track many times (more than 250 laps) so I observed it and checked my video and photos carefully to be as accurate as I can.
Despite its racey look, all data are based on stock car's datas. I spend many hours to found and/or measure it myself
Nothing is perfect but I did my best

Alignement values are in accordance with real data

Thanks to:
Lunae for amazing help in physic
ElMariachi for the sound
Maksim for 3ds help
Kunos for the Tires
All friendly tester

Have good time
Friendly yours
iRev