Honda NSX-R NA1 1992 Honda produced two batches of limited production NSX-R (some referred to NSX Type-R but it was never the official name), the first from 1992-95, the second from 2002-04. Both of them concentrated on weight reduction and more aggressive tuning. The first NSX-R undercut the standard car by 120 kg thanks to a stripped out cabin, by deleting air-con, power windows, power steering, audio system and sound deadening materials, by using lightweight Recaro bucket seats, Momo racing steering wheel and titanium gearshifter knob, and by ditching the spare tire. By the way, it set out the formula to be followed by the later Integra Type R and Civic Type R. The 3.0-liter engine of the first NSX-R was tuned to deliver 10 more horsepower than the standard car, while a lower final drive ratio biased towards acceleration. As the car was set up for track use, its suspension setting was about 100 percent stiffer than stock. This inevitably came at the price of ride quality on regular roads. The second batch of NSX-R was derived from the facelifted (post-2002) NSX. It adopted the same weight reduction measures and suspension tweaks as aforementioned, further supplemented with some aggressive aerodynamic tweaks. The front bonnet (made of carbon-fiber) featured a large air outlet to generate positive downforce. A larger rear spoiler (also carbon-fiber) did similar thing to balance the weight distribution. A slightly higher drag (0.32) and lower final drive ratio resulted in a lower top speed than the standard car, but official figures of 0-60 mph improved from 4.8 to 4.4 seconds. It also set an impressive lap time of 7 min 56 sec in Nurburgring. Officially, the 3.2-liter engine of NSX-R had the same output as the stock one, but in reality it was smoother, more responsive and more powerful at the upper rev, thanks to fully balanced pistons, con-rods and crankshaft. Each of these moving components were weighed and controlled within a tight tolerance. The electronic throttle was also tuned to be more responsive. The NSX-R was a focused track car. This sounds at odds to the original NSX, which was renowned for refinement and user friendliness. However, motoring journalists loved its great handling, sharp engine response and pure communication through the unassisted steering. These qualities made it a match to Porsche 911 GT3 and Ferrari 360 Challenge Stradale. It also put a perfect ending to the once mighty Japanese supercar. 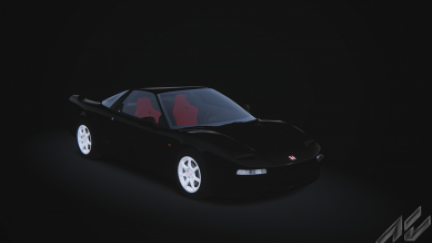