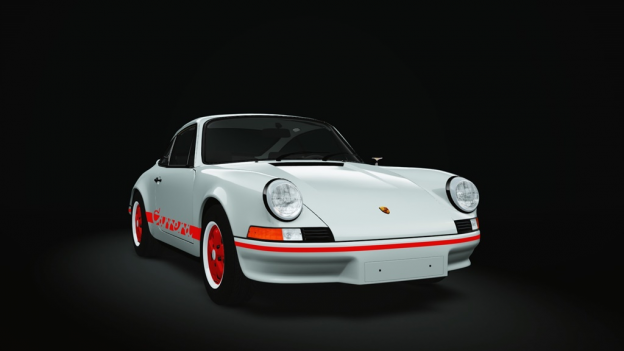 Revealed at the 1972 Paris Auto Show, the Carrera 2.7 RS was a special model used to homologate the 911 in Group 4 racing. Developed from the 911S, the 2.7 was more potent in almost every area. Compared to the standard Carrera, the 2.7 RS featured a larger engine, wider flares to accommodate the Fuchs alloy wheels, stiffened suspension, larger brakes and a ducktail rear spoiler. With the use of a Nikasil coating on the cylinder walls, the 2.4 unit could be bored out to a capacity of 2687 cc, but the standard valve train was retained. At the time, this became the largest engine available on a Porsche and was good for 210bhp at 6300rpm. And with a taller 4th and 5th gear, the top speed was increased to 152mph. Initial production for the 2.7 was only 500 cars and it sold out almost immediately. Three versions were available, including a lightweight Sports trim, Race Trim or more opulent Touring trim for the road. The lightweight version was substantially lighter with thin-gauge body panels, lighter windows and a stripped out interior. Production began in April of 1972 and finished in July of the same year with 1580 total cars. Around 1300 of these were the standard Touring model.