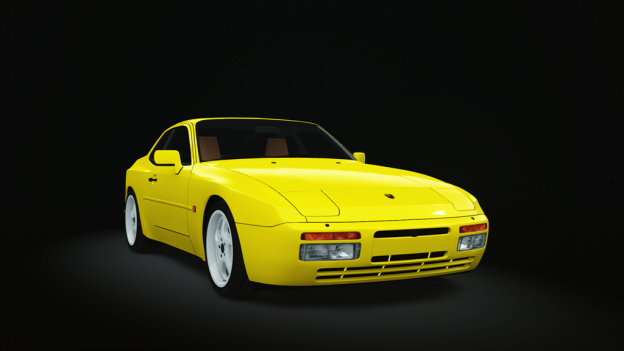 The Porsche 944 is a luxury sports car that was built by Porsche from 1982 to 1991. It used the 924 platform that remained in production until 1988. The 944 was intended to last into the 1990s, but major revisions planned for a 944 "S3" model were eventually combined into the 968 instead, which replaced the 944. The 944 was available in coup or cabriolet body styles, with either naturally aspirated or turbocharged engines.

For the 1987 model year, the 944S "Super" was introduced. The 944S featured a high performance normally aspirated, dual-overhead-cam 16-valve 190PS (140kW; 187hp) version of the 2.5L engine (M44/40) featuring a self-adjusting timing belt tensioner. This marked the first use of four-valve-per-cylinder heads and DOHC in the 944 series, derived from the 928S4 featuring a redesigned camshaft drive, a magnesium intake tract/passages, magnesium valve cover, larger capacity oil sump, and revised exhaust system. The alternator capacity was 115 amps. The wheel bearings were also strengthened and the brake servo action was made more powerful. Floating 944 calipers were standard, but the rear wheel brake circuit pressure regulator from the 944 turbo was used. Small '16 Ventiler' script badges were added on the sides in front of the body protection mouldings. Performance was quoted as 0 100km/h (62mph) in 6.5 seconds (Best) and a 232km/h (144mph) top speed due to a 2857lb weight. It also featured an improved programmed Bosch Digital Motronic 2 Computer/DME with dual knock sensors for improved fuel performance for the higher 10.9:1 compression ratio cylinder head. Like the 944 Turbo, the 944S received progressive springs for greater handling, Larger front and rear anti-roll bars, revised transmission and gearing to better suit the 2.5L DOHC higher 6800 rpm rev limit. Dual safety air bags, limited-slip differential, and ABS braking system were optional on the 944S.

A Club Sport touring package (M637) was available as was the lightweight 16 inch CS/Sport Fuch 16x7 and 16x9 forged alloy wheels. This SC version car was raced in Canada, Europe and in the U.S. IMSA Firehawk Cup Series. Production was only during 1987 and 1988. It was superseded in 1989 by the 'S2' 944 edition. The 1987 944S power-to-weight ratio was such that it was able to accelerate from 0 to 62mph in 6.5 seconds thus matching the acceleration of its newer larger displacement 3.0L 944S2 sibling.