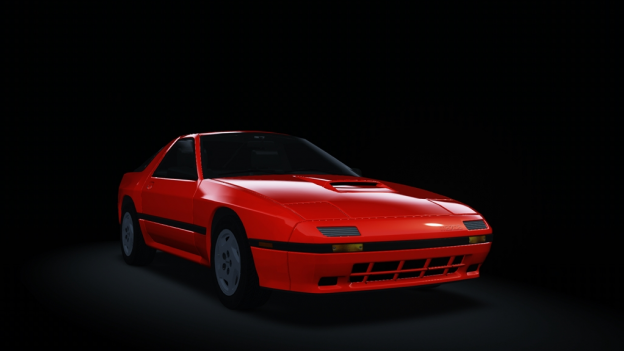 The Mazda RX-7 is a sports car produced by the Japanese automaker Mazda from 1978 to 2002. The original RX-7 featured a 1,146 cc (69.9 cu in) twin-rotor Wankel rotary engine and a front-midship, rear-wheel drive layout. The RX-7 replaced the RX-3, with both models sold in Japan as the Mazda Savanna.
The original RX-7 was a sports car with pop-up headlamps. The compact and lightweight Wankel rotary engine is situated slightly behind the front axle, a configuration marketed by Mazda as "front mid-engine".
The Series 4 (19851988) was available with a naturally aspirated, fuel-injected 13B-VDEI producing 146 hp (108 kW). An optional turbocharged model, (19851988) known as the Turbo II in the American market, had 182 hp / 185 ps (135 kW). The Series 5 (19891992) featured updated styling and better engine management, as well as lighter rotors and a higher compression ratio, 9.7:1 for the naturally aspirated model, and 9.0:1 for the turbo model. The naturally aspirated Series 5 FC made 160 hp (119 kW), while the Series 5 Turbo made 200 hp / 205 ps (147 kW).
The second generation RX-7 ("FC", VIN begins JM1FC3 or JMZFC1), still known as the Mazda Savanna RX-7 in Japan, featured a complete restyling reminiscent of the Porsche 924. Mazda's stylists, led by Chief Project Engineer Akio Uchiyama, focused on the Porsche 924 for their inspiration in designing the FC because the new car was being styled primarily for the American market, where the majority of first generation RX-7's had been sold.
While the SA22/FB was a purer sports car, the FC tended toward the softer sport-tourer trends of its day, sharing some similarities with the HB series Cosmo. Handling was much improved, with less of the oversteer tendencies of the FB. The rear end design was vastly improved from the FB's live rear axle to a more modern, Independent Rear Suspension. Steering was more precise, with rack and pinion steering replacing the old recirculating ball steering of the FB. Disc brakes also became standard. Mazda also introduced Dynamic Tracking Suspension System (DTSS) in the 2nd generation RX-7. The revised independent rear suspension incorporated special toe control hubs which were capable of introducing a limited degree of passive rear steering under cornering loads. The DTSS worked by allowing a slight amount of toe-out under normal driving conditions but induced slight toe-in under heavier cornering loads at around 0.5 G's or more; toe-out in the rear allows for a more responsive rotation of the rear, but toe-in allowed for a more stable rear under heavier cornering. Mazda also introduced Auto Adjusting Suspension (AAS) in the 2nd generation RX-7. The system changed damping characteristics according to the road and driving conditions. The system compensated for camber changes and provided anti-dive and anti-squat effects. The Turbo 2 S5 uses a turbo charger with a twin scroll design. The smaller primary chamber is engineered to cancel the turbo lag at low engine speeds. At higher revolutions the secondary chamber is opened, pumping out 33% more power than the naturally aspirated counterpart. The Turbo 2 also has an air-to-air intercooler which has a dedicated intake on the hood. The intake is slightly offset toward the left side of the hood.
In general the car was criticized to be too bumpy and to have too light steering wheel at low speed (due to speed variable steering assist).