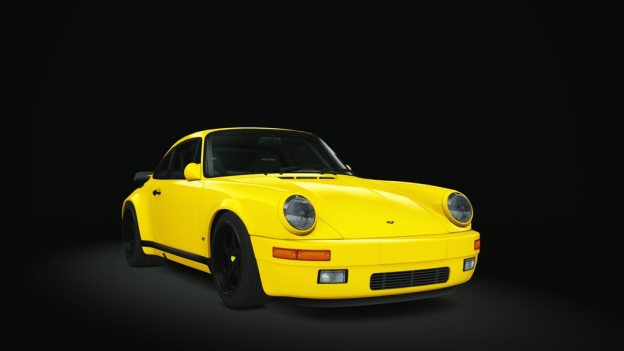 Introduced for the 1987 model year and based on the Porsche 911, the CTR featured an enlarged and highly tuned version of Porsche's 3.2 litre flat-six cylinder engine, lightened body panels, an integrated roll cage (adding chassis stiffness in addition to occupant safety), upgraded suspension and braking systems, a custom-designed transmission, and several unique trim pieces such as polyurethane bumpers, and the use of the fender-mounted oil filter (a Porsche feature for the 1972 MY only) necessitated by relocating the oil tank forward to clear the intercooler on that side.Much attention was given to aerodynamic considerations, with the body being de-guttered seam welded and the use of filler panels for the door pillars and 935-style mirrors. Prototype models had NACA-style intercooler intake ducts over the rear fenders (later dropped, as it was discovered that air was pulled out, rather than in, at speed due to a low-pressure area), while later models had additional slots in the rear bumper corners for the air to exit.Developing 469 hp (350 kW) and 408 lbft (553 Nm) of torque and weighing in it at only 2,530 pounds (1,147 kg), the CTR provided stellar performance, with a 0-60 mph time of around 4 seconds and a top speed in excess of 200 miles per hour (320 km/h). Although a small group of vehicles such as the Ferrari F40 and Porsche 959 were faster to 60 miles per hour (97 km/h), the Yellowbird could outperform all competition when it came to top speed, topping out at 211 miles per hour (340 km/h), a top speed that made it the fastest sports car in the world at the time of its release.The car received its nickname, Yellowbird, during testing by Road & Track magazine, whose staffers noted the contrast created by its yellow paintwork against the overcast skies on the day of their photo shoot.