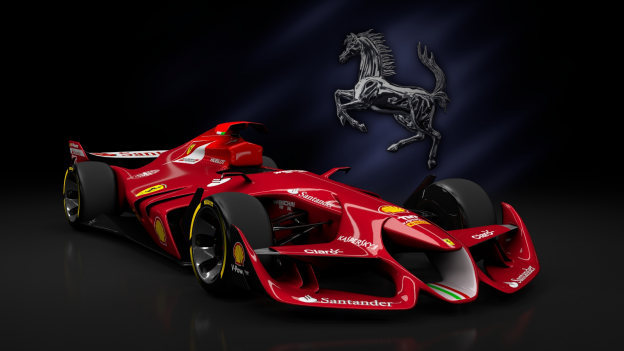 The Ferrari F1 Concept is a one-of-a-kind vehicle concept conceived to challenge the confines placed by the regulations at the pinnacle of world motorsport.

Originally described as a 'provocation to liberate creativity', the radical design is an example of what designers could do once disentangled by strict limitations.

Revealed publicly in February 2015 after the myriad of new technical regulations to the sport in 2014, a season which left Ferrari winless for the first time since 1993, the Ferrari F1 Concept became a statement of the circumstances Formula 1 had put itself in: in pursuit of relevance in the world of today, it may have lost certain attributes which attracted the crowds of the past.

In creating the Ferrari F1 Concept for Assetto Corsa, a portion of the Virtua Simulazioni team took on a project primarily inspired by the Ferrari designers and spun it right on its head. This 'concept of a concept' was never intended to be a 1:1 scale replication of the original design in both shape and expectation of engine technology. Its objective was not only a test of the limitations of the game, but also to be used as a platform to freely explore new creative ideas.

The turbo-charged V12 power-unit producing a total of ~1000 bhp, ~220 bhp of which is transmitted through the Energy Recovery System, is just one important component in balancing the relevance to the world of today, with the desires of the fans from the past.

The Ferrari F1 Concept boasts many creatively-charged features including: an optional cockpit enclosure, dual digital steering-wheel displays with innovative implementation methodologies, a red-hot glowing exhaust, a rear-view camera integrated to the dashboard for better visibility of surroundings, car showroom surprises, and much more.

Make no hesitation, this car was intended to be driven competitively. Whilst both challenging and rewarding to drive, the Ferrari F1 Concept offers a wide downforce range by design with its huge front wing structure and its single curved-edge rear wing. Nonetheless, it is still able to propel itself to speeds of up to ~350kmh or more, maintaining grip with its wide Pirelli prototype tyres sitting on large 18.5 inch wheels ensuring sufficient contact with the track when you need it most.

The Ferrari F1 Concept truly is the product of creative freedom in honor of the famous Italian marque. This is the gift that keeps giving, and it is now yours to unleash.