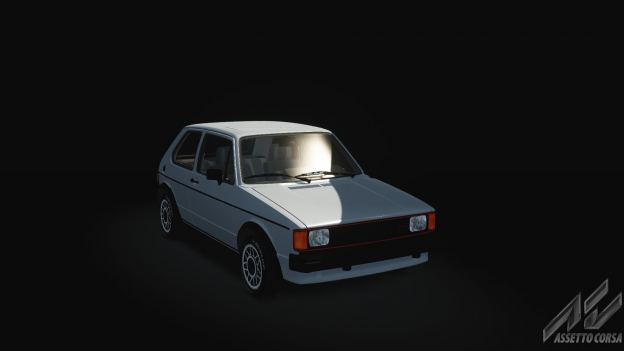 The Volkswagen Golf Mk1 (Rabbit in USA) is a small family car, the first generation of the Volkswagen Golf and the successor to the Volkswagen Beetle. Presented in May 1974. It was intended by Volkswagen as a modern FWD, hatchback replacement for the aging Beetle Replacing the Beetle was a vital goal for Volkswagen's continued survival. By the early 1970s, the company had fallen into financial difficulties and Beetle sales began to decline sharply. Water-cooled, front-engine, RWD small cars began enjoying customer loyalty.The solution arrived with Auto Union. They had attracted a small following with their technologically advanced Audi front wheel drive medium sedans. Volkswagen had acquired the Ingolstadt-based company in 1964 from Daimler-Benz. Audi's expertise in water-cooled engines and front-wheel drive would be essential in developing a new generation of Volkswagens. The Volkswagen Rabbit GTI, the North American version of the high-performance Golf GTI, debuted in Canada in 1979 and the United States for 1983. Assembled from parts made in Mexico, Canada, Germany and the U.S. in Volkswagen's Westmoreland assembly plant, it had the same Mk1 chassis, and the same A1 body type as the Mk1 Golf GTI that had been on sale in Europe since 1976, with a few exceptions. Key distinct features of the Rabbit GTI were its squared front end styling, and its alloy snowflake wheels. The interior came in red or blue or gray felt and leatherette trim. The squared styling of the front end, particularly the wraparound direction indicator lights, gave it added safety and slight improvement in performance. A small number of European specification GTIs made it to Canada under an agreement with the government that allowed foreign soldiers training at Canadian military facilities to bring their personal vehicles with them. As a result of this, VW made available (for many years) all unique European model parts required through VW of Canada. It was possible then, although very expensive, to build a 'real' GTI. Some enthusiasts did so based on the reputation of the European car.